The Best Of The Professionals 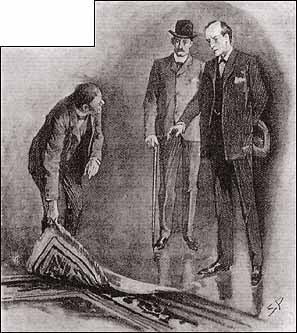 A limerick I wrote many years ago that popped back into my head this evening whilst watching Granada's 'The Empty House'.

For as long as the Game has been played
This problem has vexed man and maid
It's really quite hard
Do you say Lestrade?
Or do you pronounce it Lestrade?


Posted by Kaptain Kobold at 22:00 No comments:

Over the weekend I finally finished reading the Canon. Well, I say 'reading'; what I mean is 're-reading' because, obviously, I've read all sixty Sherlock Holmes stories a number of times. Indeed when I was younger, and less tied down with children and such, I used to make a point of reading the Sherlock Holmes stories once a year, just to keep them fresh in my mind.

It's been a while since I last read a Holmes story. In fact I'm not sure of the last time I did so. Fifteen years, maybe more. So back at the beginning of January I decided that it was time to read them again. I was off on a camping holiday, and looking for some reading to take with me, and packed the 'Adventures' and 'Memoirs', reasoning that they would be enough to see me through a week. I finished them when I got back, then did 'A Study In Scarlet', 'The Sign Of Four' and 'The Return', before moving on to 'The Hound of the Baskervilles', 'His Last Bow', 'The Valley of Fear' and finally 'The Casebook'. As you can see I didn't quite read them in publication order, but almost so. I read the Oxford edition, because whilst my venerable copy of the 'Penguin Complete Sherlock Holmes' is more convenient, it's heavy to carry around (I like to read on the train, and also read in the park at lunchtime) and the print is getting a little small for my ageing eyes.

So, thus far I seem to have done little I've done before. However this time I found I was reading the stories as stories, and that was a new experience. You see, not long after I first read the stories I got sucked into the world of Holmesian societies and scholarship. So every time I read a Sherlock Holmes story there was always part of my mind that was pondering whether the dates were correct, or where Watson's wound was. I was always reading them as if it were for a test. Not this time. This time I just enjoyed them for what they were - stories. I savoured them; enjoyed the language and plots. And I found that I enjoyed them more than I had done for a long time.

What was interesting was that stories I didn't regard that highly read far better when I wasn't rating each one in terms of canonical and scholarly interest. And age seems to have mellowed me as well; stories I regarded as rather average when I was younger improved greatly when read by my older self reading for pleasure rather than intellectual gamesmanship.

So take the challenge. Ignore the scholarship. Cast it aside. Just read the stories. And enjoy them.

Posted by Kaptain Kobold at 10:55 No comments:

Many years ago I was a member of a number of Sherlock Holmes societies, and was occasionally guilty of the odd, small, monograph. The purpose of this blog is to collect these writings into one place so that anyone who might be interested can read them.